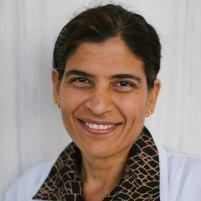 Dr. Sushma Bhadauria has helped women in and around Los Angeles, CA, take control of their health with cervical cancer screening aimed at identifying the earliest stages of cancer. Her compassionate approach helps patients feel at ease during this important screening procedure so they feel confident about the care they receive.

Why is cervical cancer screening important?

In the U.S., about 12,000 women are diagnosed with cervical cancer and more than 4,000 die from the disease each year. Many patient experience no symptoms in the early stages of cancer, which means the cancer is able to grow and develop undetected. Cervical cancer screening is the number-one way to detect cancers early so they can be treated.

What are the symptoms of cervical cancer?

If you've noticed any of these symptoms, it's critically important to see your doctor immediately for a screening and evaluation.

A cervical screening collects and evaluates cells that line the cervix, the “neck” of the uterus that connects it to the vagina. These cells are collected during a pelvic exam, using a specially designed swab to gently remove cells on the surface of the cervix. By examining these cells under a microscope, abnormal “precancerous” cells can be identified early, before cancer has a chance to develop. These cells can also be examined for human papillomavirus (HPV) which has been associated with precancerous changes in cervical cells. When cancer is detected, your doctor may order a biopsy, or tissue sample, for further diagnosis.

Your doctor also may visually inspect your cervix using a special lighted instrument called a colposcope. The colposcope uses a magnifier to make it easier for the doctor to see the cervix and identify abnormalities.

We accept most major PPO insurance plans. Below is a short list of the plans we accept. Additionally, we will accommodate all cash patients so that every patient can receive high quality medical care at a reasonable rate. Please contact our office if you have any questions.

Please feel free to reference Dr. Bhadauria's Tax ID number to see if you are in-network: 800961833

Words from our patients